Contracts help businesses get things done. But even the best contracts are not immune to misunderstandings and disagreements. When these arise, there is a chance that one party will accuse the other of a breach. If you own a business, it’s important to understand what constitutes a breach of contract. You should also know what kinds of defenses you may have. The contract litigation attorneys of Rosenbaum & Taylor fight to defend companies against allegations of breaches of contract.

Breaches can affect any type of contract, regardless of how long you and the other party have worked together. A breach occurs when one party fails to fulfill an obligation spelled out in the contract. Some breaches are willful, but these are not too common. Instead, breaches of contract typically occur because of misunderstandings or minor violations.

If you or your company are accused of a breach, it’s important to act fast. Aggressive attorneys are quick to pounce on actual or even perceived contract violations. While the other party may issue you a warning of some kind, litigation is usually not far behind. These are some common allegations of breaches of contract:

A breach of contract may be:

The good news is that because litigation is so expensive, it’s in everyone’s interest to seek resolutions outside of court. At Rosenbaum & Taylor, we react quickly to defend our clients against alleged breaches. This begins with trying to negotiate a settlement, modify the contract, or utilize other remedies to avoid a lawsuit. Disputes occur every day in business, and there’s no need to derail a perfectly good business relationship over it.

In the event negotiation doesn’t work, you will likely be forced to defend yourself in court. There are many defenses you may be able to offer, depending on the circumstances in your case:

Not in writing. Certain contracts, including those involving real property, have to be in writing. The doctrine that requires this is called the statute of frauds.

Mistake. This is where both parties make a mistake about some basic element of the contract. An example would be an agreement by you to buy a rare piece of art from the other party. Later, you find out the piece of art is a forgery, but neither of you knew this before. You decide not to go through on the deal.

Fraud. Intentionally misrepresenting or omitting a key fact to induce you to enter into a contract is fraud. An allegation of fraud is an attack on the validity of the contract.

Lack of capacity. To enter into a contract, one must have the legal ability to do so. Being under age, or under the influence of drugs or alcohol, could undermine the contract.

Duress. Physically threatening or forcing someone to enter into a contract is called duress. A contract executed under such a condition would not be valid.

Unconscionable. Some contracts are so outrageously one-sided or unfair that they are considered unconscionable. This is often exhibited where one party, having greater bargaining power, takes advantage of the other.

Impossibility. Some contracts cannot be performed because of conditions outside of either party’s control.

Waiver. This occurs when the other party essentially gives up the right to sue you. The party may agree to allow you to do something other than what was agreed, for example.

Defending Your Company Against Allegations of Contract Breaches

A breach of contract is serious business. It can destroy your relationship with the other party. You could be facing liability and damages. And your company’s reputation will take a hit. If your business is facing accusations of breaching a contract, let Rosenbaum & Taylor go to work for you. Reach out to us today to discuss your case.

NextWhy Your Business Needs (or Should Update) a Company HandbookNext 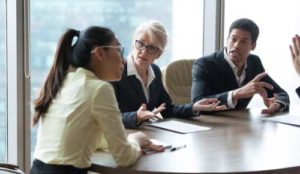 How Do I Start A Business In New York?

Why Your Business Needs (or Should Update) a Company Handbook