If a deal goes bad, it’s often not long before one party accuses the other of fraud. This typically takes the form, more specifically, of fraudulent inducement. When these cases cannot be resolved, and a lawsuit is filed, the defendant party has to act fast. That’s where the contract litigation attorneys of Rosenbaum & Taylor come in. We help defendants fight for their legal rights in court. It starts with understanding what exactly fraudulent inducement is.

Fraudulent inducement generally means that a party was tricked into entering a bad deal. The plaintiff will allege that you, the defendant, used fraud and deceit to get the deal done. The problem with these cases is that they are often filed to account for poor business decisions the plaintiff made. But just because a deal doesn’t turn out the way a party intended does not mean there was the fraudulent inducement. To prove this claim against you or your company, the plaintiff must establish the following by clear and convincing evidence:

Cases like these often fail because there are heightened pleading requirements. The plaintiff is required to state with particularity the underlying circumstances that show fraud. Merely alleging fraud without sufficient detail can open the complaint up to a motion to dismiss. In some cases, therefore, your attorney can have the lawsuit tossed with minimal litigation.

It is not sufficient for a plaintiff to argue that the defendant did not perform under the contract. This may support a breach of contract claim, which is distinguishable from a fraudulent inducement claim. Fraudulent inducement means the defendant promised to do something with a preconceived intent not to follow through. That a party later failed to perform under a contract is simply not enough.

As the defendant, you can expect the plaintiff to seek damages based on its claimed pecuniary losses. Plaintiffs often try to recoup damages to compensate them for the profits they won’t realize. However, plaintiffs cannot demand potential profits as a form of damages. They are limited only to the alleged losses they suffered by relying on the misrepresentation. The point of these lawsuits is to put the plaintiff back in the position they were in before the fraud. Your attorney will explain the damages sought and attempt to minimize them.

We Have The Experience It Takes To Defend You

Rosenbaum & Taylor know that defending our clients doesn’t just mean understanding the law. We also know the importance of a thorough investigation in uncovering the facts necessary to build a defense. Where possible, we also employ pretrial motions and other techniques to defeat weak or invalid lawsuits. We apply a comprehensive approach to defending our clients’ rights in court. If your company is facing any sort of contract litigation case, including claims of fraudulent inducement, turn to us. Call us today to speak with our team.

PrevPreviousHow Do I Defend My Company Against A Claim Of Unfair Competition?
NextHow Do I Start A Business In New York?Next

Why Your Business Needs (or Should Update) a Company Handbook 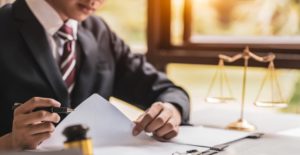